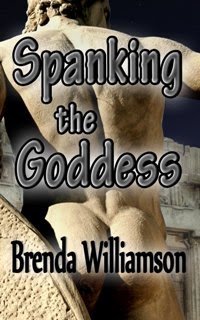 Spanking the Goddess
by Brenda Williamson

Chosen to become a goddess, Calandra has foreseen something greater. When she is taken up from her mortal world and thrust into the arms of a servant to the gods, she must endure all tests to learn the extent of her powers. But there is a shadow in her vision that she has not figured out yet, and worries its a pivotal point of her failure or success. Could that key element be her long-time attraction to the Dog Star?

The Dog Star, Sirius, half god and half man, would rather not have anything to do with the games the gods play. When he meets Calandra, a mortal lust begins to guide his thoughts and evoke his suppressed emotions. He sees beauty in Calandra’s perfect form and it draws him into the intense feelings he’s always avoided. But Sirius also senses a greatness in Calandra’s pure soul causing him to fear losing her to a predestined fate.

Angry voices cut through the howling wind around Calandra. Her senses all muddled, she ran for safety in the obscuring stormy weather. When a cold surge of air lashed her back, she stopped in her tracks and stared at the rumbling heavens.

The Gods of Olympus also displayed an irate temperament. The once blue sky had darkened and the turbulence of the spring tempest thickened the air surrounding her with a gray fog. Too much went on in her mind—too many commands she had no wish to obey.

With her palms outstretched, she pushed against the strong wind and found her hands instruments of her will. As if the heavy air was a curtain hanging in her way, it parted.

“There she is,” someone shouted from behind her.

She glanced back to see two men racing to catch up to her.

What had she done to upset them?

Why was she running?

All the questions had answers, but she had no time for them. An impulse urged her to flee. And she trusted her instincts, even when her mind went blank.

The folds of the dense mist closed, trapping the men behind her. A smoky gray cloud enveloped her and suddenly the gusts of rampaging air calmed.

The heavens opened and a glimmering celestial light showered over her.

Hypnotized by the dramatic changes, she searched the twinkling sky for Sirius, the brightest star of all. She had always found solace with that beacon as if it was a burning ember of hope meant only for her.

Calandra lifted her arm and stretched out her fingers toward the soothing radiance. Loving the way the glow twinkled on her fingertips.

Suddenly, a vortex of white mist engulfed her feet. Stars burst into an outline of a dog. They blended into one ray of glowing light. She glanced down as the meteoric rise of vapors elevated her from the ground. The faint yell from her pursuers became less of a distraction.

Floating on a cloud, she looked to the heavens. The translucent mist took form into a chariot pulled by a creature with the body of a lion, the head of a hawk and the tail of a serpent. The most spectacular was the way he flapped his massive wings to glide and steer the chariot closer to her.

Taken in by the magical sight of the creature, she stood in silent awe.

Then an alluring, masculine voice penetrated her thoughts. “Take my hand,” he commanded.

She stared at the long fingers piercing the glow of white. Without hesitation, she grabbed hold and felt relief in the secure strength of his grip pulling her onto the chariot. Encircling her slender frame easily with one arm, his hold assured her she’d not fall.

Her life before became insignificant. Whether he be man or god, he had her full attention.

The taut sinew of his arm was unyielding to the pressure of her fingertips. His hard body pressing against her back offered a comfort that made her feel safer than she had ever believed possible. She fought the desire to snuggle deeper into his hold.

She considered conversation, but the seductive scent of him chained her mind to the pleasures of his masculine fragrance. The sex-laden perfume swept up her nostrils and she took short intakes of air to gather the entire essence of him.

Caught in the moment, she knew no fear. Excitement gained ground. Then he shifted his hold, moved his arm, pressed his large hand squarely over one cheek of her quivering bottom and pulled her up against his solid contours.

Calandra gulped at the tingle she felt from his possessive touch. Uncontrollably, she squirmed.
Whether by his design or her growing desires, he kneaded her ass. His groping fingers stimulated an arousal she wasn’t ready to commit to—yet. She looked for an escape and discovered the impossibility of fleeing. Careening through a star-filled sky gave her no place to leap. Not that she really wanted to give up her position.

“Who are you?” she nervously whispered as the white light in the heavens absorbed them.

“The Dog Star,” he announced with a hint of pride and a lot of arrogance.

Even though he continued to rub and squeeze her buttocks, she’d not let him intimidate her with his harsh tone.

“That’s it?” She shuddered from the pressure of his finger raking her thin toga into the crack of her ass. “You’re called nothing else?”

His finger pressed the skirting deeper. The stimulation to her anus intensified. She clutched the sleek hard flesh of his arm. “I am Calandra,” she said on a sharp intake of air.

His stroke persisted. With her head so near his chest, his heartbeat echoed. It enticed her to press her ear against him. The vibrant, slowly escalating rhythm, entranced her. Soft hairs tickled her cheek.
She felt the hardness of his erection lodged tight to her belly. She rose on her toes as if it was a possibility to make the tight bulge of his cock spring free of his clothes and penetrate her. The impractical act remained in her thoughts as a whimper escaped her.

She dug her fingernails into the back of Sirius’ arms. Trembling, she fought off her oncoming orgasm. But her ass muscles clenched involuntarily, groping for the tease of his finger. Suddenly, she fell away from him. He didn’t force her, but he did propel her out of his grasp with urgency. In slow motion, she tumbled backward until she hit an unyielding stone floor.

All that she had thought transpired faded like a dream. Had he brazenly fondled her bottom or had her imagination took flight with the idea?

“Here’s your neophyte, Maximus,” Sirius announced. “I suggest from now on you do not mark them for the Greeks to persecute.”