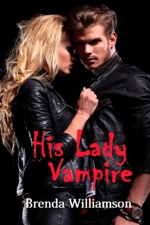 Gade hunts and kills vampires. Tanith is his weakness, a sexy blonde vampire he’s fallen in love with. While sporting a sharp wit, she hides her feelings from the vampire hunter, fearing Gade isn’t as serious about a relationship as he is about the hot sex they share.

When a mishap occurs putting him near death, he lets her change him into a vampire. Then things really begin to heat up as well as get dangerous between the two. Her maker is a cruel vampire that doesn’t like to share. But Gade can’t ever see himself losing, his lady vampire.

Gade hopped off the top of the metal fire escape onto the roof of an abandoned apartment complex. Winded from his climb up the three-story building on a rickety ladder, he faced one of the vermin he hunted in the seediest area of New Orleans.

Vampires were vile, lifeless creatures who sucked the blood from the living. If his girlfriend, Eva hadn’t been a victim, he would have never taken up his nightly occupation as a vampire hunter.

“This was the wrong part of town for you to be sucking back a hot one.” Gade drew an oak stake out of his waistband. He liked the density of hardwoods. They didn’t break easily.

“Hey, I wasn’t going to take it all.” The nameless creature grinned, exposing a fang still dripping with the blood from the man leaning against a vent pipe in the roof.

“Well I’m going to make sure you don’t ever do anything again.”

For two years Gade slaughtered each bloodsucker he could get close too. A year back, he had made one exception—Tanith Britt—a challenge to kill, the beautiful vampire came packaged with all the right curves to stop him in his tracks.

Enamored by her vivacious personality and sharp wit, she intrigued him. Her dead status unnerved him until she kissed him with the feral passion of a tigress. Not a bone in his body argued she wasn’t alive in the best sense of the word. After that day, he no longer wanted every vampire dead, especially not the one that turned him on with her lustful gaze. While he originally had suspected she vamped him with her stare, he quickly shot down the idea with logic. Able to question her ability meant all his thoughts were of his own making.

The man that Gade had saved, retreated.

But Gade needed to see for himself whether the vamp had bitten the guy, or worse, had changed him into the sort of creature who needed to be killed.

“Wait!” Gade yelled to the man.

From the corner of his eye he noticed the vampire shuffling toward the rooftop door. Torn between saving or killing, Gade chose to stop the victim who mindlessly backed closer to the roof’s edge. He rushed to grab the man. It meant letting the vampire get away, but tomorrow was another day and there would be another vampire.

Gade didn’t notice the gun in the man’s hand until it made that sharp resounding pop. They both stumbled in opposite directions. Gade touched the sting in his abdomen, surprised by the intense burning pain. Of all his injuries, he had never been shot. Vampires didn’t carry guns. They had their teeth and strength, and that mind control ability as their weapons.

Gade looked up from his wound and saw the man teetering on shaky legs against the low-walled edge of the building. For a second, he swayed as if he had a chance at saving himself. Gravity won out. The man tipped backward and fell off the building.

Gade staggered forward. In the shadows below, darkness swallowed the man. Not knowing if he had been turned into one of the vile creatures of the night, Gade jumped down on the metal grating of the fire escape and began a swift descent. A fireball continued to burn in his gut from the bullet wound. His vision blurred as the throbbing radiated through his torso.

Before he could manage the leap from the last rung on the steel ladder to the ground, he fell. He hit the pavement hard with a solid thud.

“Damn,” he shrieked, writhing in pain.

A clickety-clack of boot heels soon grabbed his attention. He lifted his head with concern for the imminent danger. If the man had been turned, he’d have the strength of a vampire and that uncanny ability to survive a fall from a three story building.

Gade’s gaze fell on stiletto heels. Traveling upward, the black leather sheathing slender legs stopped knee high. He recognized the sexy boots from the knife cut he had made in the left one when he first tried to kill the lady vampire.

Her feminine laugh rang with amusement. “Just the way I like a man,”