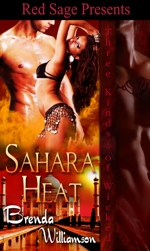 Sold to the Sultan as a concubine, Sabra dreams of love. Yet, the passionate and forbidden embraces she shares with the Sultan’s son, Xavier can only bring her heartache. After her first meeting with the Sultan, she knows she can never be happy as a slave to his needs, and she voices her objection. However, when the insulted and displeased Sultan orders a painful punishment, Trey, the eunuch assigned to attend her comes forward and convinces the Sultan that it may be more beneficial for Sabra to endure training to learn her place.

Xavier can’t resist the beautiful and beguiling Sabra. From behind lattice stone walls he watches as Trey teaches the delicate desert flower to dance and move to please the Sultan, and he soon finds himself so enchanted with the slave that he becomes careless enough that Trey catches him watching. When Trey suggests he help train Sabra, Xavier can’t refuse. However, after his power-seeking brother catches them in an intimate setting, Xavier fears his obsession with Sabra will be the death of them all.

Xavier went slow, enjoying her submission. However, he hungered for a genuine response. There were a thousand slave girls in the palace more willing than he dared think about. Sabra was the one he desired. The one he wanted to hold him as if he meant the world to her.

“No,” she murmured, relaxing against him as he pulled her close.

“Did you have enough to eat?” He caressed her face, reigning in his lust, remembering to defile her was to break the laws of the Sultan.

“Yes,” she answered in an uncharacteristic timorous manner.

He laughed and sat back. “You are so timid, now. Am I not to your liking?”

“I should return to the cart.” She jumped to her feet.

“You’ll stay.” Xavier forget himself with his command, and made a quick retreat. “Please?”

Sabra turned around. The “yes” she wanted to say was in her gaze. She knew she didn’t have any right to refuse him. Just as he knew he should let her leave before he went too far.

Xavier got up and crossed to her. He enveloped her within the circling of his arms, and captured her mouth beneath his. Her hum churned his pursuit into something more than a curious tasting of her lips. He slipped his hand forward and cupped one breast. A simple tug drew her already loose sleeve further down her arm. It took nothing to bare her chest. He squeezed and kneaded her supple flesh, rolling his finger back and forth over one of her hard nipples.

Her demure stance, showed an apparent apprehension. It set him back a step.

Her fingers grasped his sleeves, alerting him to her willingness.

“Undress for me.” He took off his robe and tossed it aside as he lay down on the bed of sheep’s wool and pillows.

Propped on an arm, he watched.

Sabra untied the laces to her cupped top. He had exposed part of her chest already. But nothing was more beautiful than seeing the pair of perfectly rounded breasts.

He crawled to her, kneeling at her feet, grasping her hips, and bringing her the closest she could be without touching another part of her.

Shrouded in the finest of transparent silks, Sabra’s lower contours were clouded, yet revealed. He looked up, staring into her eyes, touching her. The small-pebbled nipple pressed his palm. Attracted by her quiet compliance to his inspection, he redirected his gaze to her other breast. He cupped it from the bottom and held it up to suck the little rounded tip centered in her dark areola. He nibbled and licked the tightening bump.

Against her other breast, he swirled his palm, pressing and squeezing the handful of flesh.

He rose up, grasped her head and held her to his kiss again. His free hand slid over her shoulder and
down her back. He drew her to him, feeling her spiked nipples press into the cloth covering his chest.

Xavier twisted her around as he lowered to a stool and pulled her onto his lap.

“You’re trembling.” He nuzzled her face with kisses. “Don’t be nervous because I desire you.”

“What?” He caressed her cheek thinking how he almost left her in the desert with Hasan.

“By how much I desire your touch,” she answered, her lashes lifting so he saw the truth of her words
in her gaze.

Xavier grasped her face with both hands and kissed her. He tried tethering his emotions. Sabra’s whimpering satisfaction forced him to express how deep her statement hit him. Roughly aggressive with his suckling of her lips and twists of his mouth against hers, he visualized her naked, astride him so that his cock lodged deep within her. The way she responded, wiggling on his arousal, drove him mad, urging him from the imagining to making it happen. He shifted her around making her straddle his legs. A firm grasp, digging his fingers into the supple flesh of her bottom, he pulled her against his stiff erection. The clothing they had on prevented him from nesting against the entrance of her sex.

Sabra’s erratic moans remained trapped between their sealed mouths. She rocked fervently while he rubbed her back, trying to dispel the strong urge to reposition her. One move beyond what they were doing, and he’d not hold back from his lust to rip away her clothes and plunge into her tight core.
Had she been this submissive and wanton with Hasan? He thought not. From her tone when she mentioned the man, there was an implied hate.

“Oh sayyid, what have you done to me?” She broke from his kiss.

He hugged her trembling body, careful he didn’t crush her small-boned structure with his own shaking arms. The hot moistness of her gasps became feverish kisses upon his shoulder, against his neck.

He had to have more.