NEW BOOK RELEASE: Shadow of the Serpent, by Brenda Williamson 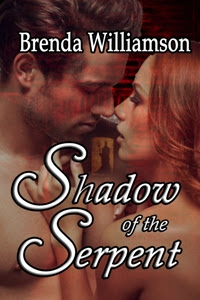 Shadow of the Serpent
by Brenda Williamson

Driven by lust and greed, a man and woman struggle to recover love in the Shadow of the Serpent.

Reporter, Kinsey Waters' past haunts her. A bad break-up has made the last ten years a blur of nameless lovers and has forced her to deal with the loneliness of emotional solitude. When the newspaper wants an article on her now wealthy ex-fiance, she feels she has an inside track on getting a story from the elusive billionaire mogul. While it would assist her move up in her journalistic career, she believes confronting Ty might also help her get over her love-hate memories of him.

Ten years ago, Ty Serpent made a pact with the devil—wealth in exchange for his soul. He gave up the only woman he loved in the hopes he'd one day return to her and make everything right. Only Satan didn't play fair, and Ty soon discovered there was no going back.

When Ty meets up with Kinsey again, he knows it's not by chance. His faith in love, long shattered, brings on the real fear that nothing can save them from the pits of hell.